Policy on enrolment in the Brussels European Schools for the 2022/2023 school year:

Terms and conditions of admission in the European Schools (breakdown of pupils into 3 categories):

General Rules of the European Schools:

For more information, parents can contact the educational support coordinator:

please refer to the table of equivalences in annex 2 of the General Rules.

This principle may be waived only where the child has been educated in a language other than his/her mother tongue/dominant language for a minimum of two years at primary or secondary level. The European Schools will presume in that case that the child will be capable of continuing his/her schooling in the language in question.

Parents will not be free to choose their child’s first language (L1), its determination being the responsibility of the school’s Director. L1 must correspond to the child’s mother tongue or dominant language, in the case of multilingual children, the dominant language being the one of which they have the best command.

Should there be any dispute about the pupil’s L1, it will be the Director’s responsibility to determine which language it is, on the basis of the information provided by the pupils’ legal representatives on the enrolment form and by requiring the pupil to take comparative language tests, organised and under the control of the school’s teachers. The tests will be organised whatever the pupil’s age and teaching level, i.e. including the nursery cycle.

Determination of L1 at the time of the child’s enrolment is definitive in principle.

A change of Language 1 may only be authorised by the Director for compelling pedagogical reasons, duly established by the Class Council and on the initiative of one of its members.

Should a new language section be created, children previously enrolled with SWALS status and who had the language of this new section as their Language 1 will automatically be admitted to the newly created language section without the need for them to be required to take comparative language tests.

In that case, a change of L1 may only be authorised by the Director for compelling pedagogical reasons, duly established by the Class Council and on the initiative of one of its members.

In view of the health measures currently in force following the Covid-19 pandemic, the Woluwe and Evere sites are not accessible to the public. It is therefore not possible at this stage to visit our facilities.

However, in order to be able to present the new Evere site, the Management has organised a webinar on Tuesday 18 January 2022 from 6 to 7.30 pm.
The link to the video is available on the School’s website www.eeb2.eu under “Enrolments – Information sessions”. 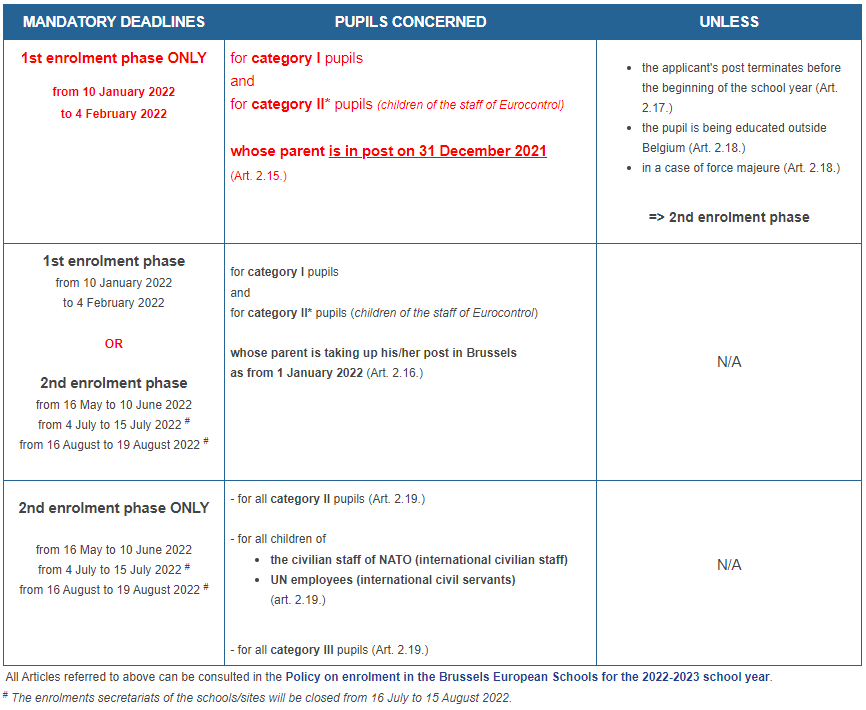 In the current health context, the enrolment service remains closed to the public.

All applications for enrolment accompanied by all the required documents must be submitted online via the Enrolment Portal and within the required deadlines.

The link to the enrolment application will be provided exclusively during the enrolment periods, according to the timetable in article 2.4. of the Policy. You can obtain it via your institution’s intranet or by contacting the school’s enrolment secretariat by email: